ACLAMO builds a stronger community one child and one family at a time.Help us achieve this goal! 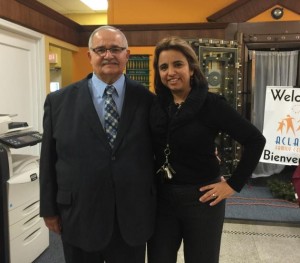 Longtime supporters will remember the 1970s when ACLAMO began under the leadership of its first executive director, Adamino Ortiz. After leaving office in the early 2000s, Adamino has remained active with each of the three executive directors who followed him, providing important advice and helping with special assignments. 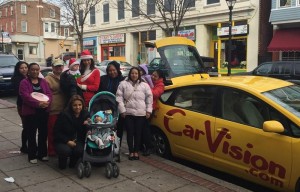 On the job for ACLAMO in December, Adamino paused for the above photo with Nelly Jimenez. Adamino was picking up a load of hams, donated by Car Vision, and delivering them to needy families in Pottstown.

When a person from Puebla, Mexico marries someone from Veracruz, the couple is faced with a culinary challenge. Some dishes are prepared very differently in Puebla than they are in Veracruz. When Carmen Romero from Puebla married Arturo from Veracruz, she took on this challenge with amazing results. Today, Carmen’s success can be measured by a thriving bakery and restaurant business in Norristown and Warminster. Her happy customers enjoy Mexican food in a wide range of styles. 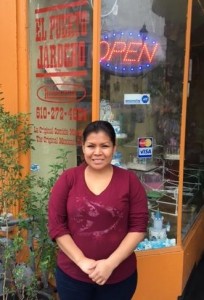 This success did not come easily and ACLAMO in the early 2000s played a major role. Along with her youngest child, Carmen enrolled in ACLAMO’s Family Literacy Program. She worked hard learning computer skills and then purchased her first computer through a reduced cost program ACLAMO offered to its students. She then searched the internet for recipes from Veracruz and other parts of Mexico and learned to cook many dishes. Her specialty became baked goods. Soon, her small apartment filled with delightful aromas and neighbors began to ask her to bake for them. Her time gradually became absorbed with cooking and she began to notice a steady flow of income. Several friends suggested that she start her own business. However, she had no idea how to begin.

Again, ACLAMO played a key role. Carmen enrolled in an ACLAMO class to learn about starting a business. It was taught by Felix Mercado, a member of ACLAMO’s board of directors. With additional advice from Samuel Rodriguez, a business owner located across the street from ACLAMO’s Norristown location, Carmen opened Puerto Jarocho Restaurant and Bakery, named after an informal nickname given to a person from Veracruz. The business is only closed three days a year: Black Friday, Christmas and New Years.

“ACLAMO gave me the tools I needed,” Carmen smiles quietly, “and God, my family and friends and I did the rest!”

As 2015 entered its last month, ACLAMO was faced with the challenge of scheduling all the community partners which wanted to present special programs during December. It took some careful planning, but all activities were combined to make December one of the most exciting ACLAMO months ever.

ACLAMO deeply appreciates the financial and programmatic support of the following individuals and groups, which allowed ACLAMO to continue to provide rich educational experiences during a time of Pennsylvania’s budget stalemate: 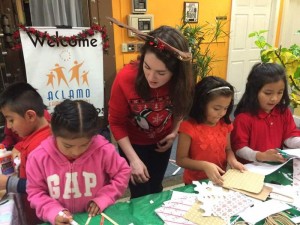 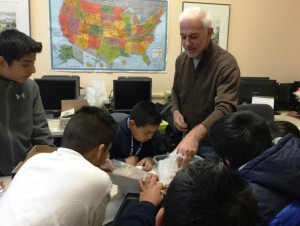 Older students were amazed by Robert Pace’s introduction to geology… 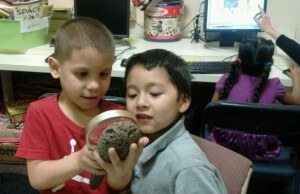 … and younger children learned what secrets a rock can reveal when one uses a magnifying glass. 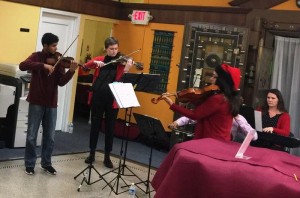 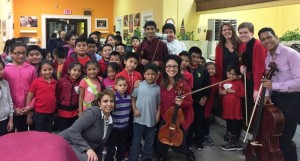 … and then joined with some of the audience for a picture. 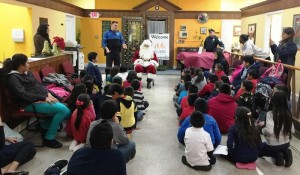 The Norristown Police Department made sure that Santa Claus put in an appearance. 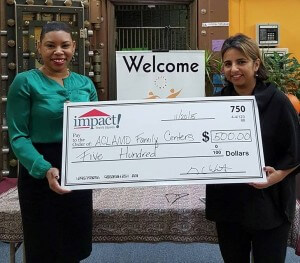 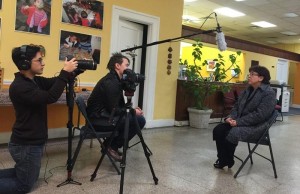 Two productions have been completed in the last month:

Comcast used the state-of-the-art HD digital audio production facilities and staff of Montgomery County Community College to produce an excellent interview with Executive Director Nelly Jimenez-Arevalo. This will appear on a future Comcast broadcast, but newsletter readers can view it here. SEE THE INTERVIEW

Victory Church in Audubon is a long time supporter of ACLAMO, providing volunteers and financial contributions in support of our social service programs. Victory Church came to ACLAMO to create a video to provide its members with information about ACLAMO’s work. WATCH THE VIDEO 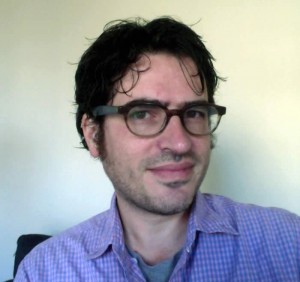 When Dr. Martin Gaspar, Assistant Professor in Bryn Mawr’s Department of Spanish, learned of the link ACLAMO has with his college, he asked if some of his students could translate parts of ACLAMO’s newsletter into Spanish. These translations can be helpful as ACLAMO provides printed information to our clients.

If you are interested in seeing the results, please follow the links below. If you are learning Spanish, you can try out your skill! You will see translations by Bryn Mawr students Paloma Alcala, Alex Bitterman, Victoria Espinoza, Ana Colon Garcia, Piper Martz, Saniya Mehra, Meg O’Day, and Cynthia Valdez.

In February’s newsletter, we will publish links to additional translations. 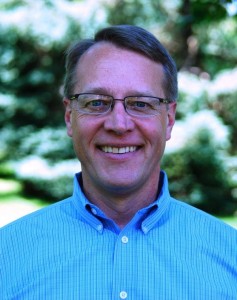 The same day that Panama strong man Manuel Noriega was removed from power in 1990, a young lieutenant in the United States Army Corps of Engineers disembarked in the Canal Zone. Gray Wirth, a new ROTC graduate from Cornell University, was eager to work in humanitarian construction in Panama and also to expand his knowledge of the Spanish language, which thus far had been primarily limited to classes in high school and college.

25 years later as Executive Director of Impact Thrift Stores in Montgomery and Bucks Counties, Gray is still committed to helping people rebuild their lives and he converses in Spanish with the relaxed fluency of a native speaker.

The path to his current position included several years of travel in Latin America with the U.S. Army, a Masters Degree from Harvard Business School, 15 years as an executive with Rohm and Haas, and a Westminster Theological Seminary Masters Degree. In addition to deepening his faith commitment, the seminary study lead Gray to seek a way to combine his faith, his desire to strengthen people and his business acumen. When he became CEO of Impact Thrift Stores, he found this perfect combination.

Drawing on his experience as Rohm and Haas Company’s President for Europe, the Middle East and Africa, Gray has helped to grow Impact Thrift Stores to the point where it now has five non profit retail stores and one site for offices and the processing of donated items. When he speaks of the future, his smile broadens as he explains plans for new and expanded services.

“We are a non profit organization with no stock holders and modest salaries,” he comments. “Thirty to fifty percent of our net proceeds are donated to non profit organizations working to strengthen children and families in need. We also help families which have been victimized by fires or other tragedies. The rest of our proceeds are reinvested for maintenance of our property and equipment. In addition, Impact Thrift Stores offers employment to some persons whose life experiences make it difficult for them to find jobs. Another strength of Impact is that it protects the environment by recyling items which would otherwise end up in landfills.”

Gray explains that Impact Thrift Stores contributes to ACLAMO “because we appreciate greatly the support ACLAMO provides to the Hispanic community. We are committed to being a blessing to the residents of Norristown where we have many Latino customers.”

Learn how ACLAMO builds a stronger community one child and one family at a time.

ACLAMO Family Centers provides educational programs, social services and health access to Latino and other low income residents by empowering them to succeed and become productive members of society.