ACLAMO > Blog > Uncategorized > A Voice for Latinos from Philadelphia to Harrisburg

A Voice for Latinos from Philadelphia to Harrisburg 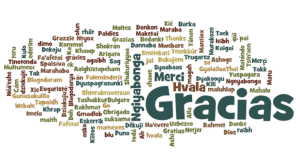 As of this writing, Pennsylvania’s budget remains in stalemate. As a consequence, ACLAMO’s financial situation is very fragile.

ACLAMO is grateful to several newsletter readers who have responded with generous donations and some key loans were also made. In addition, Montgomery County officials, from the commissioners to middle level administrators, have worked to help. However, to keep our programs running for the present, we have had to make a temporary salary reduction.

If you have not helped ACLAMO with a generous gift, this holiday season would be a perfect time. All amounts will help! 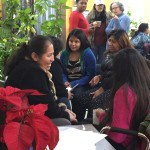 Parents and students talk about college.

One secret to the academic success of Latino youth is raising family expectations for post high school education and providing specific strategies for applying to college.

In November, ACLAMO welcomed staff from the Bryn Mawr College Admissons Office, who provided Adelante families with specific advice and answered questions. Families also discussed their plans and options they are considering. 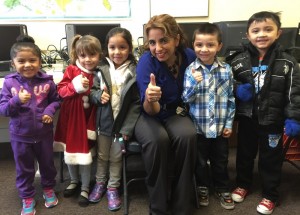 Even the child wearing gloves joins Director Jimenez in giving the Philadelphia trip a “thumbs up”!

Holiday spirit was in the air as 40 mothers and children gathered at 9 a.m. for the train ride into Philadelphia. They enjoyed the light show at Macy’s and were enthralled by the village scenes from Dickens’ “A Christmas Carol.” Many mothers did not know the Dicken’s story, so lead teacher Linda translated it for them. They were fascinated.

Before they left for the city, the children enjoyed singing. Click on the picture below to see the video. The second part of the video goes with the next article on toy distribution.

Each December, ACLAMO supporters give over 1,000 toys to needy families. This year’s distribution in Norristown will be on December 12 and in Pottstown on January 5.

Executive Director Nelly Jimenez has been in the center of the preparations for this 30-year tradition, even driving the large truck used to collect some of the toys. 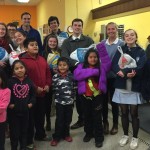 Students and faculty members from Episcopal Academy pause during distribution for a picture with some recipient families.

Another longstanding ACLAMO tradition is the distribution of turkeys to needy families for the holidays. This year was no exception.

Thanks to donations from many supporters, ACLAMO was able to give holiday turkeys to 202 families!
[h2title title=”ACLAMO’S DIRECTOR JIMENEZ: A VOICE FOR LATINOS IN THE DELAWARE VALLEY”] 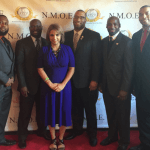 Celebrating with Norristown Men of Excellence. 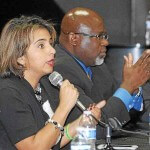 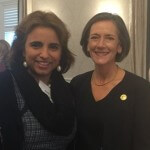 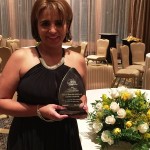 Accepting award from Impacto Latin Newspaper for being one of 2015 Delaware Valley’s Most Influential Latinos. 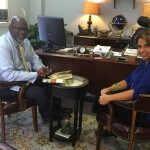 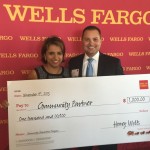 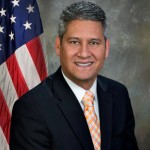 Pedro Cortes currently serves as Pennsylvania’s Secretary of State. But when the Boston Red Sox lost the 1975 World Series in seven games, he was a young boy living in Carolina, Puerto Rico. Pedro became a loyal Red Sox fan that year. His inspiration was Gabriel Berriz, a family friend who graduated from the Massachusetts Institute of Technology.

Early on, Pedro developed the skill of identifying people from whom he could learn. Gabriel was one of those. Another was Pedro’s Aspira high school guidance counselor. She listened to Pedro’s desire to learn English, study on mainland USA and become a lawyer. With her guidance, Pedro enrolled in the University of Massachusetts, which had an excellent program for students learning English as a second language.

At UMass Pedro sought out another skilled advisor and presented her with his next goal. He wanted to study a subject which would guarantee him employment, should his plans for law school not work out. In 1989, Pedro graduated with a Bachelor of Science in Hotel, Restaurant and Travel Administration – and a fiancée, Lissette Lizardi, who still had another year of college study. So Pedro took a job in hotel management at UMass and waited for Lissette’s graduation.

In 1990, Pedro and Lissette were married and moved to Pennsylvania. Later, Pedro would earn a law degree from Penn State Dickinson School of Law and a Master of Public Administration from Penn State Harrisburg. In addition to several other administrative positions, Pedro has served two Pennsylvania governors as Executive Director of the Governor’s Advisory Commission on Latino Affairs and as Secretary of State for Governors Rendell and Wolf.

“ACLAMO is a pioneer in supporting Latinos and is a pillar of the Latino Community,” Cortes affirms. “The key advice and encouragement I received during my career is being replicated time and again through the work of the ACLAMO staff and volunteers – Do all you can for others without concern for who gets the credit. I am enthusiastic about ACLAMO’s role in Pennsylvania. ACLAMO and Executive Director Jimenez have my thanks and my support!”

Posted in: From the Executive Director

From the Executive Director newsletter Programs and services Success stories